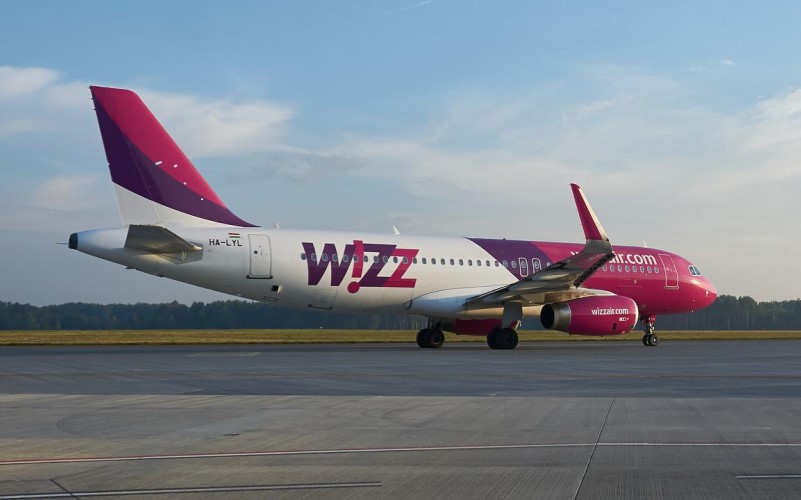 Wizz Air is an Hungarian low-cost airline with its head office in Budapest. Legally it is incorporated as Wizz Air Hungary Ltd. Wizz Air has the largest fleet of any Hungarian airline, and serves 42 countries. It serves many cities across Europe, Israel and the United Arab Emirates. Its Jersey parent company is Wizz Air Holdings Plc that is listed on the London Stock Exchange.

Established in September 2003 with Indigo Partners as the lead investor and registered in Pest County in Hungary. The first flight goes back to 19 May 2004 and went from in Katowice International Airport. The current CEO is József Váradi, former CEO of Malév Hungarian Airlines.

In 2011 Wizz Air had 11,000,000 passengers. That was 15% more than the year before, in 2010. Still in 2011 its number of passengers included 4,200,000 passengers on Polish routes what was only 2% more than in 2010. Wizz has bases in Bosnia-Herzegovina, Bulgaria, Czech Republic, Romania, Georgia, Latvia, Lithuania, Macedonia, Moldova, Romania, Serbia, Slovakia and Ukraine. Recentlyit opened a base in London also. However, Poland is still the largest market for Wizz Air!

Since March 2016, Wizz Air has its head office is in Laurus, Budapest. Previously, the head office was at Budapest Liszt Ferenc International Airport.

While attempting to hasten SkyEurope’s demise in June 2009, Wizz Air claimed it had been “profitable for several years”. Although a private company doesn’t need to publish its financial accounts annual reports are still available. In November 2009 Wizz Air seems to have been significantly loss-making and had never made a profit while delaying the pay-back of €32 million of debt by five years. Losses since commencing operations total €78 million, which, in 2009, fueled suggestions that the airline would file for bankruptcy. Since then Wizz Air reported profits in 2012, in 2013, in 2014 and in 2015.
Wizz Air has the second lowest CASK (cost per available seat km) among European airlines.

As of April 2015, Wizz Air had created subsidiaries in three countries, but these no longer exist:

Wizz Air Ukraine was the Ukrainian division of Wizz Air, which had its own air operator’s certificate and operated from Kyiv Zhuliany International Airport and Lviv International Airport. As result of the 2014 situation in Ukraine, Wizz Air Ukraine was terminated on 20 April 2015. Some routes to and from Kyiv were taken over by Wizz Air itself while all others ceased.

Wizz Air Bulgaria was Wizz Air’s Bulgarian subsidiary based at Sofia Airport. It since ceased operations.

Wizz Air Romania was a planned subsidiary to be based at Timișoara Traian Vuia International Airport. However, this sub-company never started operations and a base was established there instead.

Wizz Announced that they are planning to launch a British division called Wizz Air UK. The airline is to be based at London Luton, taking advantage of a number of take-off and landing slots acquired from Monarch Airlines when the latter entered administration in 2017. The airline has applied to the CAA for an AOC and Operating Licence. It is expected that the airline will launch operations in March 2018 using British registered aircraft. Wizz Air UK will start to take over the flights to the UK that are currently operated by Wizz Air. Wizz Air said that the airline will employ up to 100 staff by the end of 2018.

Wizz Air started new services between Katowice and London Gatwick in 2008. In January 2008, flights started from Gdansk to Gothenburg, Bournemouth and Coventry. In summer 2008, Wizz Air restarted summer seasonal services from Katowice and Budapest to Girona, as well as a new weekly service to Girona from Gdańsk. Other summer services from Budapest are Heraklion, Corfu, Burgas and Varna; from Katowice to Crete-Heraklion and Burgas; and Warsaw to Corfu and Burgas. It also restarted its three-times-weekly service from London Luton Airport to Burgas. On 2 October 2008, Wizz Air announced that a number of its Romanian services would have increased frequency following an order for three Airbus A320 aircraft.[27]

On 26 June 2015 the airline opened its 19th base, at Tuzla International Airport in Bosnia and Herzegovina and deployed one new Airbus A320 aircraft at the airport. With one aircraft stationed at the airport, Wizz Air opened new routes to Memmingen (near Munich) and Torp (near Oslo), commencing on 26 June 2015, as well as to Hahn (near Frankfurt) and Skavsta (near Stockholm), commencing on 28 June 2015.[32]

In February 2017 Wizz Air announced a new base at London Luton Airport in the United Kingdom.[36] Also in 2017, the company added three new routes, to Tel Aviv, Israel, Pristina in Kosovo, and Kutaisi in Georgia, for a total of over 500 routes.[6]

In January 2018 Wizz Air announced a new base at Vienna International Airport in Austria. Three Airbus 320/321 are planned to be based in Vienna and the company will operate a total of 17 new routes from the Austrian capital.[37]