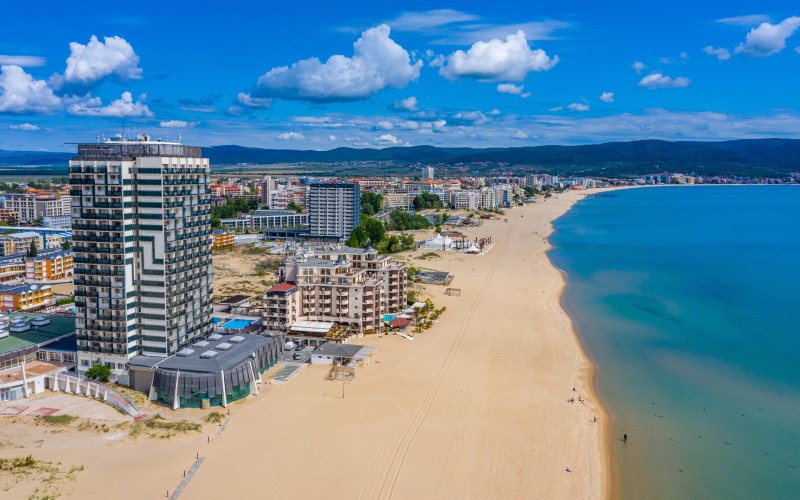 The Bulgarian Black Sea coast stretches from the Southern frontier of Romania over 378 km until the Northern frontier of Turkey in the South. Around 130 km of these are white and golden sandy. Much of the rest is rocky but a splendid place to observe the Black Sea, on some places you can even watch the dolphins. There are two cities on the Bulgarian Black Sea, Burgas, and Varna, each the capital of their namesake province and both have an airport. The region between these two cities is the busiest one of the whole coastline. There are the big resorts Sunny Beach, Sveti Vlas, Nessebar, Pomorie, and many others. The beach towns of the Southern region, South of Burgas have frontiers with the Strandzha nature reserve in common and therefore especially attractive for the environment. North of Varna are some more expensive beaches as Golden Sands, and further, there are Albena, Balchik, and Kavarna.
Image: Aerial view of Sunny beach – a popular holiday resort in Bulgaria

Durankulak
After Shabla it has the second largest population (455 in December 2009) of the Dobrich province in North Eastern Bulgaria. It has as neigboring village Vama Veche at the other side of the Romanian frontier. Durankulak is best known for its lake, only few meters from the Black Sea and on some places separated from it by only a small road.
Explore Durankulak

Krapets
Krapets is a village in the Shabla municipality in the Dobrich province in the North Eastern of Bulgaria. December 2008 its population was 378 inhabitants, the third largest of Shabla after Shabla (3,586) and Durankulak (455).
Explore Krapets

Shabla
Shabla is the administrative center of the Shabla municipality in the Dobrich province in the North Eastern of Bulgaria. The town had a population of 3,586 inhabitants in December 2009. The beach is on 5 km from town and was until the fall of communism a popular sea resort for Eastern Block tourists. The beach area has a large car park and many old bungalows. In general the seaside of the municipality have untouched nature and virgin beaches. Other sights are the Shabla lighthouse which is the tallest, oldest and easternmost one on the Bulgarian coast and a fortress dating from the 4th century.
Explore Shabla

Tyulenovo
Tyulenovo can be reached via the old seaside road from Kavarna along the rocky coastline, through the sea resort of Rusalka, and village of Kamen Bryag. Tyulenovo has a rocky shore also from where dolphins can be observed. They come nearer to land in the early morning and in the evening. There are 60 inhabitants but in the summer because of tourism the number of people living there is increased to 200. The caves in the cliffs are used by backpackers as free lodge.

Down the seaside path from Tyulenovo to Kamen Bryag there is a megalithic complex called the Rocky Monasteries. Tyulenovo is especially known for its oil fields discovered from which the first was discovered on on 31 May 1951. Witnesses of the oil drills can be seen on the pictures. Kamen Bryag, Black Sea
Located in Kavarna Municipality, Dobrich Province, it had a population of 76 in 2009. Nevertheless it is a popular summer holiday destination since the 2000s.
Explore Kamen Bryag

Russalka
Rusalka is a seaside resort in Dobrich Province. It is located in a nature reserve in a bay 90 km northeast of Varna and 23 km from Shabla, surrounded by oak forests.

There are 600 luxurious all-inclusive one-storey houses in the resort. In the 2000s mainly German tourists came here, but in the 1990s it was French-dominated.

There are many tennis courts of different soils, a small football pitch, and a volleyball court. Other sports can be practised as archery, horse riding, yachting, kayaking, scuba diving, and more. Situated between Yailata and Kaliakra nature and history reserves are among the attractins in the vicinity.

Bolata
The Bolata cove is on the northern rocky coastline of the Bulgarian Black Sea. It is 3 km to the north of the Kaliakra headland. The nearest settlements are Bulgarevo village in about 5 km distance and the town of Kavarna in 13 km to the west.

The cove has a perfect semi-circular shape with a beautiful sandy beach. A very small river flows into the sea. It is the only approachable place where the sea can be reached for kilometers of cliffs spread out northwards and southwards.

Kaliakra with fortress and nature reserve

Kaliakra fortress, Black Sea
Kaliakra is a long and narrow headland Black Sea, 12 kilometres (7 mi) east of Kavarna, 60 kilometres (37 mi) northeast of Varna and 65 kilometres (40 mi) southwest of Mangalia. The coast has vertical cliffs until 70 metres (230 ft) down to the sea.

Firstly it is a nature reserve where you can observe dolphins and cormorants. It is situated on the Via Pontica, a major bird migration route from Africa into Eastern and Northern Europe. It makes Kaliakra a place for observation many other rare birds. Kaliaka’s fortress exists in the remnants of Despot Dobrotitsa’s residence. Balchik
Balchik is located in Dobrich Province on 42 km northeast of Varna. The population is 12,196 for the city and 22,035 for the urban area (December 2009). The ethnic composition is 72,9% Bulgarians, 15,8% Turks, 8,8% gipsies, andf the rest are other, indefiable or undeclared.
Explore St Constantine & Helena

Albena, Black Sea, Bulgaria
Albena is a major beach resort on the Black Sea coast. It is 12 km South of Balchik and 30 km North of Varna. The resort was purposed built in the 1960s and although it became a commercial center the natural environment stayed untouched. The beach is about 150 m wide over a distance of 5 km and populated with hotels on the beach itself. A small community has developed with even own public traffic consisting in a mini train transporting tourists all day. However this is the main scenario of a Black Sea major resort and is very well comparable with Sunny Beach. But the big hotels on the beach are unique for Albena. There are also plenty of recreation possibilities of different kinds as is comely in a touristic center.
Explore Albena

Saint Konstantine and Elena
Saints Constantine and Helena is the oldest Black Sea resort in Bulgaria. It is located in a landscaped park in the Northern part of the Black Sea strip and was also called ‘Druzhba’ and ‘Varna Resort’ in the past. You can reach the seaside town via Varna International Airport and public transport from Varna. Renovation of the complex started in 2017 after which it has become one of the most popular resorts in Bulgaria with several attractions.
Explore St Constantine & Helena